I've read and seen quite a few articles on botnets, and botnet culture.

Most describe the various business models; i.e. the criminal economics of running a botnet, such as making cash from spamming, DDoS, Ad-clicking, Scareware, key-logging and account stealing, hosting warez, and selling or renting botnets.

So, plenty of ways to make a few quid - if you have no morals.

However, there must be other more challenging things that can be achieved with a botnet, especially the larger ones with 100,000+ PCs.

I remember a good few years ago the SETI@home project where anybody with an internet-connected PC could participate by running a free program that downloads and analyzes radio telescope data to look for "intelligent" signals from space. 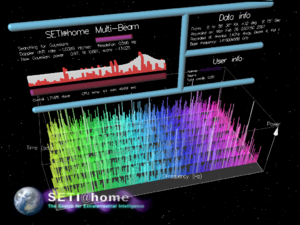 Anyway, it has harnessed a massive amount of computing power over the years. Since its launch on May 17, 1999, five million people have contributed and the project has logged over two million years of computing time.

There are many other projects that have followed a similar model for other computations and you can now volunteer the idle time on your computer (Windows, Mac, or Linux) to; cure diseases, study global warming, discover pulsars, and many other types of scientific research.

So, back to the illegal botnets:

I can think of lots of calculations that could be done millions of times faster with the distributed power of a botnet; brute-force login attempts, hash cracking, forging SSL certs and cryptanalysis to name but a few. Its quite a scary notion for e-commerce.

Using Nmap as a vulnerability scanner

All good hackers know nmap; the popular and highly functional port scanner. However, one thing you may have overlooked, is some of the newer functionality such as NSE.

It like to remind people, when discussing Hacking techniques, to remember that your actions are your Karma, and you will reap the results of your Karma. Please be an Ethical Hacker.

The Nmap Scripting Engine (NSE) was introduced with the release of nmap 4.2, and adds powerful functionality, such as brute force attacks, vulnerability scanning and much more.

Lets take a look at one example.

First check your version is up to it
(I'm using backtrack 4, so it's all good ;o)

Nmap version 5.21 ( http://nmap.org )
Looks fine, so take a look in "/usr/share/nmap/scripts", and you will see a whole batch of scripts.

Picking one at random, lets look at robots.txt.nse

If you do a "more robots.txt.nse" you will find more information, but a simple usage could be something like:

Nmap done: 1 IP address (1 host up) scanned in 0.50 seconds
Which would be pretty handy if you were looking for areas on a webserver that the owner doesn't want Google to index, and of course you could easily scan a large range of hosts.

You can try some other examples for yourself of course.

Try this for example, which runs all of the relevant scripts, on a host, or range of hosts (based on open ports):

This is very useful for vulnerability scanning and could help identify holes in your server patching processes.
Posted by Ben at 11:02 3 comments:

I signed up and am studying for the CISM exam on the 12th of December 09.

This is another string to add to my bow as I passed the CISSP back in September. CISM Is more focused on the management of IT Security, rather than technical details.

It would be nice to have both though.

Between now and then I have the 2nd half of PRINCE2 Project Management (PRINCE2 Practitioner) to do, in November, so that should keep me busy.

Also, in the new year I am looking forward to getting a bit more hands on with OSCP and CEH

Looks like OSCP is pretty tough, CEH should be relatively easy compared to OSCP.

Meanwhile I've been playing with this http://www.offensive-security.com/metasploit-unleashed/ in my spare time, which is a good resource for learning about Metasploit.
Posted by Ben at 22:54 1 comment: