Sometimes installing the latest releases is a good thing. You get to learn lots of new technology, and improve your understanding and troubleshooting skills at the same time.

However, there is a cost in time, tweaking and fixing things, and learning new ways to do the same things you used to do. Today Backtrack 5 R1 is only 3 days after release, so there are bound to be some issues.

Some things seem to work a lot better (for example I had none of my usual issues with graphics drivers, that I often get during a Backtrack install)

However, some tools that were previously working fine seem to be broken (at least on the BT5 R1 KDE 64-bit version that I am currently looking at).


Problems I have seen so far (and workarounds/fixes):

Wireshark won't run - I got the following error:

The Backtrack development team are aware of this, and currently in the process of developing a fix.

Workaround = Copy the following files, which fixes the problem:

VMware Player will install, but not compile and run - with the following errors in "/tmp/vmware-root/setup-*.log":


Failed to compile module vmmon
This is pretty essential for my home lab - probably more an issue that VMware need to fix, to make VMware Player work with the latest Linux Kernel.

Run the following command to install it:

This seems to work pretty well, and has more or less the same features as VMware Player. 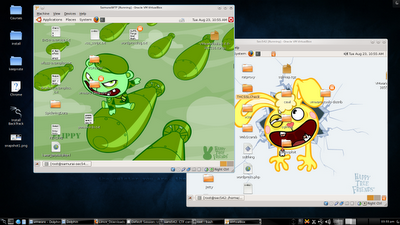 (Guess which VM is the victim ;o)

Workaround2 = See comment from Anonymous below (untested at this time)

TBD - I guess I can get along without this for a while.

Firefox is not the latest version (which could potentially be a security risk).

Flash plugins are missing for Chrome and Firefox.

Workaround = Add the executable in the correct directories

Close both Chrome and Firefox and then do the following:

I did have an issue where I think it went into screen-save mode where the system seemed to go into a graphics-card test screen and completely lock-up (?! not sure on this one).

Not seen this since

Yeah, this one is not much fun, seems persistent and I'm currently troubleshooting it... Hangs on red BT5 boot-loader screen.

Workaround = Not sure, I re-installed my system, and have not seen the issue since. Weird.


(I will add issues and workarounds as I find them in this post)
Posted by Ben at 11:18